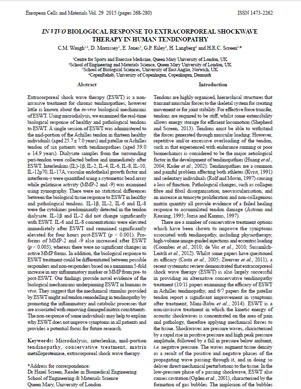 Extracorporeal shock wave therapy (ESWT) is a noninvasive treatment for chronic tendinopathies, however little is known about the in-vivo biological mechanisms of ESWT.

Using microdialysis, we examined the real-time biological response of healthy and pathological tendons to ESWT.

A single session of ESWT was administered to the mid-portion of the Achilles tendon in thirteen healthy individuals (aged 25.7 ± 7.0 years) and patellar or Achilles tendon of six patients with tendinopathies (aged 39.0 ± 14.9 years). Dialysate samples from the surrounding peri-tendon were collected before and immediately after ESWT. Interleukins (IL)-1β, IL-2, IL-4, IL-6, IL-8, IL-10, IL-12p70, IL-17A, vascular endothelial growth factor and
interferon-γ were quantified using a cytometric bead array while gelatinase activity (MMP-2 and -9) was examined using zymography. There were no statistical differences between the biological tissue response to ESWT in healthy and pathological tendons. IL-1β, IL-2, IL-6 and IL-8 were the cytokines predominantly detected in the tendon dialysate. IL-1β and IL-2 did not change significantly with ESWT. IL-6 and IL-8 concentrations were elevated immediately after ESWT and remained significantly elevated for four hours post-ESWT (p < 0.001). Proforms of MMP-2 and -9 also increased after ESWT (p < 0.003), whereas there were no significant changes in active MMP forms. In addition, the biological response to ESWT treatment could be differentiated between possible responders and non-responders based on a minimum 5-fold increase in any inflammatory marker or MMP from pre- to post-ESWT. Our findings provide novel evidence of the biological mechanisms underpinning ESWT in humans in vivo. They suggest that the mechanical stimulus provided by ESWT might aid tendon remodelling in tendinopathy by promoting the inflammatory and catabolic processes that are associated with removing damaged matrix constituents. The non-response of some individuals may help to explain why ESWT does not improve symptoms in all patients and provides a potential focus for future research.